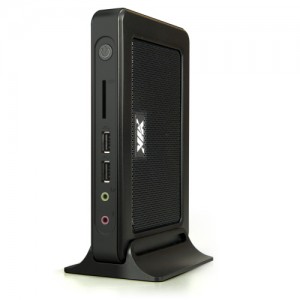 Yet again VIA surprises us with their VIA ARM DS System,  a new Android PC hardware product. VIA seems to placing a solid first foot into this new market niche for Android PC solutions.

The VIA ARM DS is an all-in-one system designed for running Android OS. Includes a standard ARM 9 “system on a chip” solution. It is cased in a very small form factor which can be placed in a stand-up position thus using very little space on your desk. The VIA ARM DS is powered also by an video accelerator capable of coping with 1080p resolutions, 64GB of NAND Flash memory for storage and up to 2gb DDR3 SDRAM.

I/O Ports on the VIA ARM DS

The VIA ARM DS includes four USB 2.0 ports, one 10/100 ethernet port, audio IN / OUT and a DVI-D display port, which can be easily converted into an HDMI port.

To sum it up, the VIA ARM DS is a very nice Android PC system. The downside will be -we suppose- it’s pricing, which remains to be announced. How much would be a fair price for you ? We would say about U$S 100 or less. Hopefully VIA surprises us with a nice price tag for the VIA ARM DS.