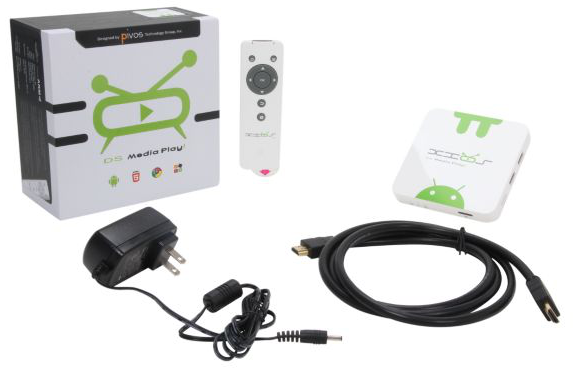 Arguably, the Pivos Xios DS media player might be yet the best media player out there for you to get your hands on. Let me tell you why:

Size wise, the Pivos Xios DS CPU case is very similar to an Apple TV 2 or 3: Rounded edges, plastic casing, rubber on the bottom side.. It also includes a “minimalist” remote control, similar in functionality as the Apple TV small aluminium remote control (hence, the minimalist label), but sized a bit bigger and wholy encased in plastic.

The Pivos Xios DS includes an HDMI video port, an ethernet port, 3 USB ports and an SDHC (up to 32 Gb) card slot for expansion purposes. The USB ports are meant to add an external harddisk or even a mouse and keyboard combo.  On the memory side, it includes 512MB of RAM and an ARM v.9 processor, coupled with a MaLI 400 graphics co-processor, enabling 1080p playback.

To Sum it up, the Pivos Xios DS is a self contained Android on PC computer, which can be used not only to run XBMC software, but also to use any application from the Google Play Store, which is a big plus. We already bought a Pivos Xios DS from amazon.com (You got the link below if you want one), so we are looking forward in the next days and weeks into telling you about our experience hands on, as soon as we get it hooked into our TV.