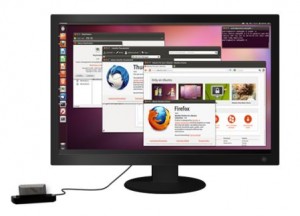 One of the particularly interesting goodies is a docking station -sold separately- which we assume can be left hooked into your TV, so you can just snap your Android Pocket Console into it when you arrive at home. At this time we may place some emphasis on the “assume” side of the information, as there is not much information about this pocket docking station, other than some intriguing claims (more on this later).

What is inside Stella Mira’s Android Pocket Console ?

It runs on Android 4.x out of the box, and to do so smoothly enough, it includes 1Gb of DDr3 RAM. On the connectivity side, it includes WIFI (b/g only!) Bluetooth 2.1 + EDR and Stella Mira is promising an optional version of their Android Pocket Console with 3G connectivity.

On the included storage side, you may select from different flash ram sizes ranging from 8gb (the base Android Pocket Console) which is priced at U$S 130 up to 128gb model (that is a first!) carrying a hefty price tag of U$S 250. The 3G model is based on the 16Gb flash ram model and you will find it on pre-order at a price tag of U$S 200.

You may thing that the Pocket Dock for the Android Pocket Console would only add a bunch of wired connectivity options, in order to facilitate the home / office integration with your TV or monitor. It does that, but also includes the ability to get a different operative system stored inside it, which will make your Android Pocket Console to boot into it.

The list of OS available at this time is exclusively on the Linux side, including Ubuntu, Lubunto, Xubuntu and Fedora distributions. You need to choose your operative system at the time of your purchase, as it comes pre-loaded inside the Pocket Dock. This last bit of information sounds a bit weird … We would like to know if the OS at the pocket dock can be user-changed.

There is a large list of intended uses on Stella Mira’s website and some of them we shall copy in here, as they will better confer the idea behind the Android  Pocket Console to you: