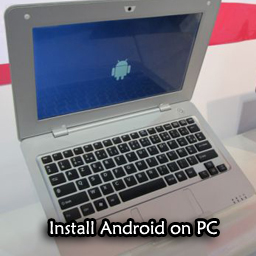 Android on PC up and running

At the time of this writing, there are three ways of running Android on PC.  They require different approaches and knowledge / dificulty levels. As a result, they will probably satisfy the requirements of different people, with different tasks or ideas on their mind. We shall present you with these solutions and later on, we will add tutorials and discussions about each one of these ways to get a working Android on PC, be it a desktop, or better yet something more deserving of it, like a netbook.

This approach is probably the one you are not looking for:  Get your Android on PC by installing an Android Emulator, which will create an isolated Android powered virtual machine inside a window on your host operative system. This is mainly used by Android developers to test and debug their applications, inside their development computers. You may also know that this solution is usually is so slow that it is of little use for everyday work. It involves installing JAVA on your PC first, and then install Android SDK,  which is where the virtual machine software is included. Then you get to configure the virtual Android machine with different parameters, including virtual screen size,  storage memory and Android version.

This option, loosely based on the emulator concept, thanks to a startup software company called Bluestacks, will let you run Android Apps and even Games on your PC. You need first to install their tiny proprietary Android virtual machine framework that will, in turn, transparently allow you to run your Android software inside different windows on your PC.  Recently, the giant chip manufacturer Qualcomm did a substancial investment on Bluestacks, and we frankly don’t know if their software will still be free or even public in the months to come, so maybe it is a nice move for you to hurry up and download it while you can.

This is by far the most difficult and demanding way, which is to actually install Android on PC as an operative system. To manage such thing you will need first an Android version compiled to run on normal PC computers. The architecture behind the usual home / office computer, notebook and netbook which usually nowadays runs Windows, Linux or MAC OS  is called x86 architecture, given that name from the first processor in the first home PC batch, called Intel 8086 … which later were upgraded into 80286, 80386, 80486, or even Pentium (80586) etc. You get the idea. The good news is that folks at http://www.android-x86.org/ have been working at it for some time now. Thanks to them, you can download a nice free x86 Android version, which will allow you to install Android on PC.

View your Android on a PC