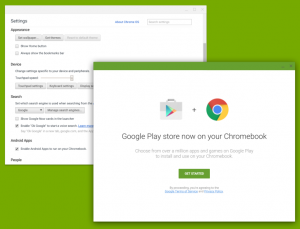 AndroVM is a ready-to-go Android on PC

AndroVM is a free prepackaged virtual machine ready to run Android on PC by using a provided Virtual Machine player. IF you already like to play with virtual machines, you may also try to import AndroVM -which is packaged in the Open Virtualization Format– into your virtualization software of choice. We tried it on our VMWARE FUSION, and after issuing a warning about a non 100% compliant OVF (Open Virtualization Format) it ended up running fine. The AndroVM package we tested included Google Apps and Google Play Market.

The guys at AndroVM seems to be actively churning out new versions while adding features. At the time of this writing, we can definitely attest on AndroVM maturity and functionality.  You will find  Android 4.1.1 version inside current virtual machine package (dated 2013022)  including seamless mouse integration, software and hardware OpenGL, and extra niceties provided that you use their  virtual machine player, dubbed AndroVMplayer.

This freely downloadable virtual machine player is available for Windows,Linux  and MAC OS. It is a finely tuned wrapper, which will let you configure resolution and DPI, as check up on hardware OpenGL availability, before starting to run the Android on PC virtual macine.

AndroVM packaged ready to run Android machines currently come in several flavors, depending on the hardware you want to emulate, as in phone, tablet, or hybrid configuration, either with or without Google Apps. If you are looking into running Android on your PC, side to side with your actual OS, AndroVM, including the preinstalled Android OS and it’s virtual machine player will do the trick. 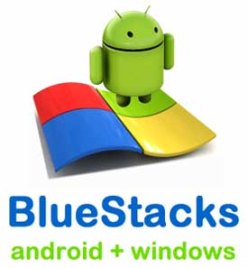 AMD starts an App Store for Android on PC

AMD and Bluestacks are partnering to offer an App Store for Android on PC. At first this seems to be a curious move. As we understand it, Bluestacks has been for some time in the search for investors and profitable partnerings for their Android on PC emulation layer, which they even ported and refined not only for Windows PC but also for MAC OS, broadening their appeal scope in the market. Bluestacks already managed to get Qualcomm, Citrix and other investors to jump into their wagon, and now AMD also engross their company wallet as a major investor.

Now, Bluestacks announces this partnering with AMD, where both will go a step further, extending their relation into a practical solution, in which AMD establishes an App Store web portal offering what it seems to be  Android on PC apps and games, with the underlying emulation technology from Bluestacks.

Android on PC apps and games from AMD App Store

Announced four days ago, this Android on PC apps and games download portal is already online, but at the time of this writing, most of the available apps and games are simply links into their developers or third party sources. Only a small percentage of these apps and games are actually available for download. When you download any of these, you are downloading a compressed package that integrates the app or game itself and the AMD’s version of the bluestacks emulation layer.

AMD claims to be very busy converting tons of other Apps with the help of Bluestacks. They aim to get into their portal only those apps and games that will perform well under the Android on PC scenario.

AMD’s version of Bluestacks has been pimped up with OpenGL hardware acceleration when an AMD graphics processor is present. This Android on PC solution will also run on generic PCs, without AMD hardware, but probably won’t be as smooth or fast on the graphics side.

Apps and Games from Android on MAC

Thanks to Bluestacks now you can also run your favorite apps and games intended for Android on MAC PC. Bluestacks Android on PC emulator has just crossed into Apple domain, liberating their users from their quite closed apps and games ecosystem into the frenzy of Google Play Store!

Right now you are able to download and install an “early” alpha version of Bluestacks Android on PC emulator for your MACBOOK AIR, MACBOOK PRO, MAC PRO, etc. This Android on MAC emulator is free, just as it’s older brother, which microsoft based users are enjoying since months ago.

Android on MAC is a good thing

“This new channel for distribution of Apps and Games into Android on MAC is a good thing”  comments a mainstream Android developer, “as it allows us to reach into a new batch of users which are educated on spending more money, until today into  Apple’s App Store”. In short, Bluestacks Android on MAC emulator is certainly a valid and elegant way to run Android software on your MAC PC.